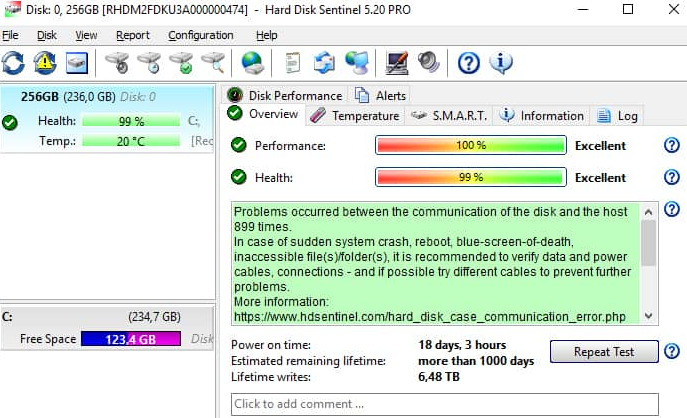 Hard drives are slowly being replaced by SSDs. SSD (Solid-State Drive) is a new generation of data storage devices used in computers. It replaces traditional mechanical hard drives by using flash memory, which is significantly faster. Older hard disk drive (HDD) storage runs slower, often causing your computer to run slower than it should. SSDs significantly speed up computers due to their low read access times and fast performances. They’re quiet as a mouse (no moving parts or sound), much faster than hard drives, and less likely to crash. However, they are a bit more expensive for the storage capacities they offer, which is why some users are afraid to invest in this “expensive” hardware.

Before we get into the details of SSD health checks on various operating systems, we’ll cover some of the preliminary information you need to know. Let’s start with how SSDs work, this will help you identify when your drive has failed or will fail soon.

How does Windows 10 calculate the estimated remaining life of an SSD?

Windows 10 uses the approximate percentage of the manufacturer’s predictive model to calculate the estimated remaining life disclosed for SSD drives. Therefore, it may not be exact. It should be noted that if Windows 10 shows the estimated remaining life of an SSD as 0%, it does not necessarily mean that the SSD has failed or is about to die. This is the only indication that the drive has completed the write/erase cycles intended by the manufacturer.

Your SSD’s performance will be determined by how much information you put on it. With some SSDs, you can store as much as 600 TB of information before it will no longer be able to work properly.

As an example, Samsung 850 Pro line, built with 3D V-NAND technology, has the following Tb numbers.

Since you get a 10-year warranty on these, that means you’ll need to write less than 450TB of data on the 2TB model for the manufacturer to replace it.

Download Crystal Disk Mark and install it. Run the app and it will tell you the current status of your SSD. If the app tells you it’s “Fine”, you don’t have to worry. In some cases, when the SSD supports it, you’ll also be able to see a percentage of its status and how much data you’ve written to it so far. My SSD doesn’t support it, but it seems to be in good shape according to this app.

Download and install Open Hardware Monitor. Run the app and expand your SSD in the list. Under Tiers, the app will tell you how much life your SSD has left. Mine still has 96% of its life, but I’ve only had my SSD for a little over a year, so it seems to have depreciated more than usual.

You can buy SSDLife Pro or try the free version from Softpedia. The Pro version is not very expensive, so if you like the free version, you might want to buy the full version. Download, install and launch the application. The SSD will tell you how you are doing. The consensus is that mine is healthy.

Five common issues that cause your SSD to fail:

Damage due to physical conditions is known as physical impairment. The most common causes are liquid spilled on your drive or your computer being dropped. But other factors, such as excessive heat, can also physically damage your SSD.

Short circuits are rare for an SSD. But, like any electronic device, a power outage or power surge could cause your unit to burn out.

Defective build errors are usually manufacturing defects. For example, if the electronics are not soldered correctly, the connections can oxidize prematurely or break. e. Since SSDs have no moving parts, these types of issues are rarer than HDDs, but they still do occur.

Why is it important to keep your SSD healthy?

Performing an SSD health check in Windows 11 will help you in several ways:

The first thing that will help you do an SSD health check is to let you know the health status of your SSD. Health Status will show you how healthy the SSD is, it will detect bad sectors and show the overall health whether good or bad.

The issues that can cause SSD failure are similar to those of hard drive failure. Common issues are physical damage (impact/water), data corruption, short circuit, faulty firmware update, and faulty construction.

When an SSD fails, you are likely to experience some or all of the following symptoms:

Performing a Windows 11 SSD health check should tell you where your SSD is failing so you can fix it.

During an SSD health check in Windows 11, you can perform “garbage collection” and other settings to improve drive performance. You can optimize or adjust the SSD for different demands.

The SSD status check process in Windows 11 often reveals the SSD/disk transfer speed. This way you will know if the transfer speed indicated by the manufacturer (write/read data) is correct. You can also learn how to perform a hard drive speed test here.

You can also get a rough idea of ​​the performance of your SSDs.

How to Check the Health of SSD in Ubuntu

How to check NVMe SSD estimated remaining life and temperature in Windows 10?

it is important to regularly check the health of your SSD in order to prolong its life and prevent potential issues. The best way to do this is by using the Windows 10 built-in tools.