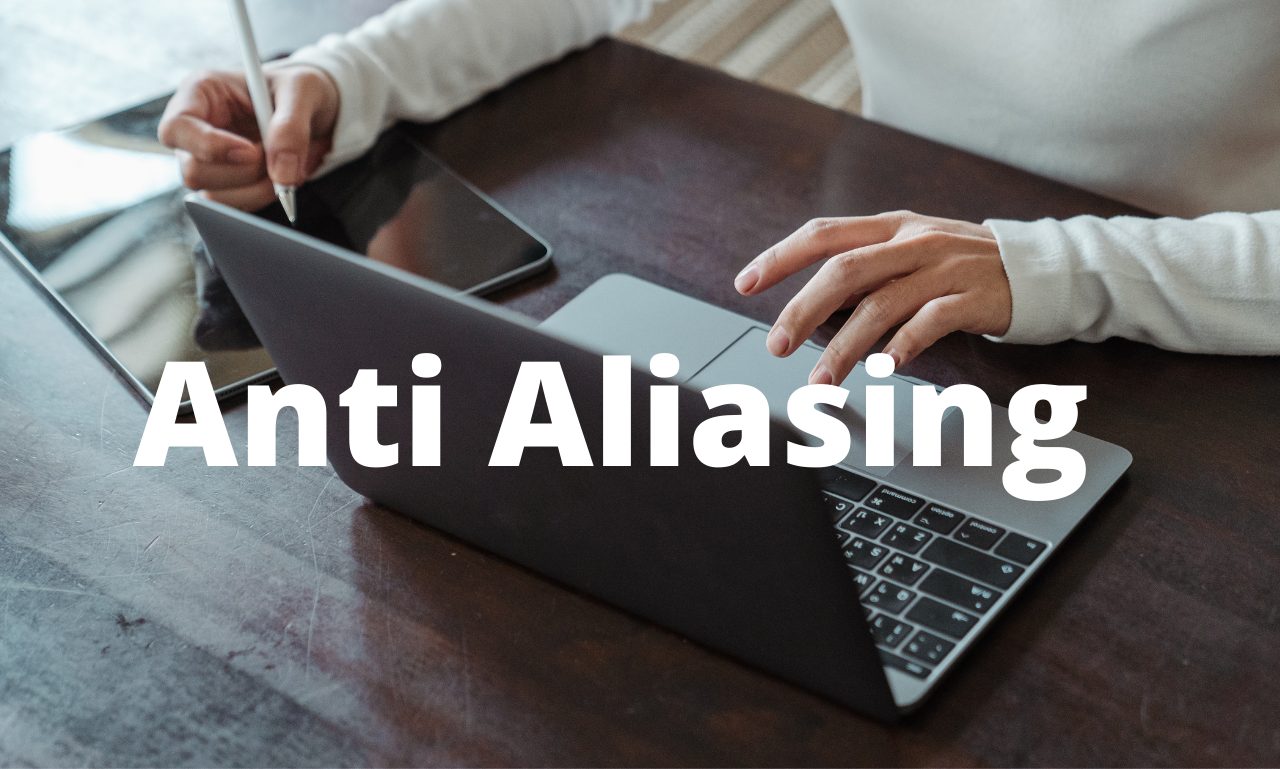 Anti-aliasing is a system on your computer which allows you to play nicely with all the pixels in PC games and smooth them out into graphics worthy of this century. In short, it’s a setting that helps eliminate jaggies.

Anti-aliasing is a graphics technique that helps improve the clarity and smoothness of lines and objects in an image. It is often used to reduce the appearance of jagged edges on characters, text, and other elements. Anti-aliasing can also be used to soften the impact of certain lighting effects, making details more visible. Those unfamiliar with PC gaming and the graphics settings found in the many different menu options that command almost every PC game could mistakenly think that anti-aliasing pertains to difficult-to-find graphic choices.

Now that we’ve covered what it is, let’s go over the two types of anti-aliasing you need to know about.

In the early days of personal computing, aliasing was a common problem. Images would look jagged and pixelated, and it was often difficult to make out fine details. With the advent of better graphics processors and anti-aliasing algorithms, however, this is no longer as much of an issue.

Anti-aliasing is a technique that smooths out the edges of images by blending adjacent pixels together. This can be done in hardware or software, and there are different types of anti-aliasing depending on the needs of the image.

Spatial anti-aliasing is one type of anti-aliasing that is used to reduce the appearance of stair casing in images. It works by blurring the edges of objects in order to create a smoother transition between adjacent pixels. It takes color samples of the excess pixels from a higher resolution image, makes samples, and shrinks it back down to the original resolution. The result is an image with pixel colors averaged from the high-resolution pixels smoothing out the edges and making them less noticeable.

Graphics processors are constantly pushed to their limits to provide the best possible graphics for gamers. In order to meet these demands, post-processing is used to improve the image quality of games. One of the most common forms of post-processing is anti-aliasing. This technique smooths out the edges of objects in a scene, which can often create a jagged or “pixelated” appearance. Traditionally, anti-aliasing has been handled by the graphics processor itself. However, this can often lead to decreased performance and lower frame rates. Recently, a new type of anti-aliasing has been developed called post-process anti-aliasing. This method is handled by the game’s CPU rather than the graphics processor, which results in improved image quality and increased performance.

MSAA stands for “multisampling Anti Aliasing,” and is one of the most commonly used types that can hit the best balance between performance and visual fidelity. This type of anti-aliasing takes multiple samples of two or more adjacent pixels to create a higher-fidelity image. The more samples are used, the higher the image looks.

Supersampling anti-aliasing is a common antialiasing method, and SSAA is one of the most popular fashion trends that you will run across. Mostly, SSAA is employed at high resolution and blurred vision is expanded to a clearer, sharper picture by using various reducing methods.

FXAA abbreviated for fast approximate anti-aliasing was the creation of NVIDIA and is known to be the best antialiasing technique for low-end PCs. The reason is that it appears on-screen, the 2D image instead of taking the 3D shape of the in-game models.

MLLA abbreviated for morphological anti-aliasing, is a technique that is additionally suitable and easy to implement because it involves manually impulse-mixing pixel components to remove even the uneven and lost edges from the picture.

One image filtering method, like MLAA, is called MSAA (subpixel morphological antialiasing) and shares its main strengths with MLAA and manifests its demerits to a lesser degree. MSAA thereby diminishes what is an optimal characteristic of MLAA-based photograph filters.

Which Anti Aliasing technique you should use?

Anti-aliasing is a term used to describe a technique that helps to smooth out the jagged edges of an image. It is used in graphics and video editing software and can be used to make graphics look sharper. Anti-aliasing can also be used to remove the grainy appearance of images. Anti-aliasing is a post-processing method that clears the screen, cleans up the screen’s noisiness, and provides a clear picture during gaming or other work. Discussing the types of anti-aliasing methods will help clear your doubts. AnxGfxAnalisis FXAA, MLAA, and SMAA are the techniques that work with postprocessing that are suitable for low-end and mid-range games because they result in better quality calls on low-spec desktop computers.

In conclusion, anti-aliasing is a technique used to smooth out the edges of objects in a digital image. This makes the image look more realistic and eliminates the jagged lines that can be seen when an object is displayed on a computer screen. Anti-aliasing can be used to improve the quality of digital images, videos, and games.